Boeing Co. BA +0.70% on Saturday said it was assessing the damage to aircraft components that were aboard a freight train that derailed in Montana en route to its plants in Washington state.
The derailment on Thursday threatened to throw a wrench in the tightly choreographed and far-flung aerospace supply chain, which depends on just-in-time deliveries of giant parts by train, plane and boat to meet the record demand for jetliners.
The 19-car BNSF Railway Co. train, which derailed near Rivulet, Mont., was carrying components including complete fuselages of six single-aisle 737s, fuselage panels for a long-range 777, and wing parts for a jumbo 747.
Most of those pieces are manufactured by Spirit AeroSystems Inc. SPR +0.88% in Wichita, Kan., where the shipment originated, and were destined for Boeing's Renton and Everett final assembly lines that piece together the majority of its commercial aircraft.
Boeing said an investigation into the accident was under way. The company has "deployed experts to the scene to begin a thorough assessment of the situation," a spokesman said. "Once we determine the extent of damage we will assess what, if any, impact there will be to production." 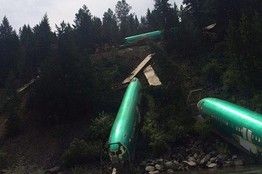 Another view of the three fuselages. Andrew Spayth


Photos from the scene showed three complete 737 fuselages that tumbled down an embankment, two of which were partly submerged in the Clark Fork River below the tracks. A fourth 737 fuselage appeared to have been torn apart during the derailment, as was resting next to the tracks.
Montana Rail Link spokeswoman Lynda Frost said she expected the westbound tracks to reopen as early as Saturday afternoon and added removal of the 737 fuselages from the river would begin Sunday morning and was expected to be completed that day.
The Boeing shipment trains are common on that route through Montana, and that area of track has a speed limit of about 35 miles an hour, she said. Ms. Frost wasn't aware of the speed the train was traveling when it derailed. None of the two or possibly three personnel on board, were injured, she added.
Ms. Frost said there weren't plans to release any additional statement or report about the internal company investigation's findings.
Boeing's jetliner supply chain has been disrupted before. Two years ago a strong tornado struck Spirit's main factory in Wichita, shutting down operations for a week.
A BNSF train in June 2011 traveling through Nebraska derailed when a tornado knocked cars from the track, damaging a 737 fuselage on board.
The latest derailment comes after Boeing announced a record first half of jetliner production, having delivered 342 jetliners, including 124 of its 737s, leaving its Renton, Wash., factory at record rates. Earlier this year, Boeing and its supply chain accelerated production of the 737 to 42 aircraft each month, or two aircraft each manufacturing day.
Major aircraft makers like Boeing and Airbus Group NV spread their jetliner factories across multiple regions and countries, necessitating a finely tuned logistics network to move aircraft components around the world. Both also use cargo ships and specially modified cargo jets to speed body, wing and tail sections to final assembly lines in sites as disparate as China to Charleston, S.C
You must log in or register to reply here.