Power of the Sheriff

Back in the good old days, the bankers hired the Pinkerton Security Corporation to go-in and take people's land and live stock during the 1800's. The authority Pinkertons needed was from the Sheriff. After paying-off the Sheriff, the representatives of the bank (Pinkertons) would enforce their own laws on the residents in that county.

Today, it's the Federal Government and all their agencies that want to impose federal laws on county residents, (soon) gun confiscation, revenue action, and FEMA emergency intervention with martial law overtones. Your county sheriff has the ultimate authority to stop any and all federal agencies from confiscation, or conducting any federal business in the county at his/her discretion.

There is a move in our country to usurp the authority of all county sheriffs by congressional authority, therefore, removing the Constitution as the sheriff's legal means to protect their county residents from federal laws and the out-of-control Patriot Act. The sheriff is the very LAST difference between New World Order tyranny and our Constitution, which each and every sheriff raised their right hand to uphold the 10th amendment.

Twenty two plus states are considering legislation to assure sovereignty under the 10th amendment of the United States Constitution.

Tyranny has reached our shores and THEY are showing their faces, but Americans are waking-up and standing side by side with their county sheriff and with governors of those states declaring independence from the world banking system that has successfully hijacked our federal government.

Sovereign state citizens need to address these issues at county commissioner meetings, and are encouraged to join membership organizations that have the manpower to encourage state and local authorities to face (head-on) the approaching danger of how tyranny is no longer a late night talk show interest, but a clear and present danger.

And like the famous comment by President Obama, "You can put lipstick on a pig, but at the end of the day, it's still a pig." That piggy bank is the world banking system, facilitated by the New World Order globalists, often referred to as the "Economic World Order." THEY are coming to your county soon, either with hand-outs, or by martial law, but likely with both. They want your weapons and could go after your gold and silver too, since the pending collapse of the dollar will require a new currency that has the backing of gold, unless the industrial war machine continues that role.

Sheriffs across the country are realizing the authority of which they never thought they would ever have to use. The former Sheriff of Graham County in Arizona is one that has appeared on many radio and TV shows. He is a constitutionalist with a message for all sheriff's in America.

"Please join me in the fight to regain our rights, while the price to pay is less than death. I am committed to doing all we can peacefully to get our country back. In order to succeed, we must first make ourselves aware of the problem. We must educate ourselves, and then we can know what action to take. One of the best and easiest solutions is to depend on local officials, especially the sheriff, to stand against federal intervention and federal criminality."
[Former Sheriff Richard Mack] http://www.sheriffmack.com/
Click to expand...

This guy doesn't think so:

In the midst of this robust national conversation about how we can use the power of the federal government to protect families and communities from violence, pro-gun extremists are increasingly asserting that they are above the law when it comes to firearms regulation. Case in point is a recent movement by a small group of sheriffs to assert "Posse Comitatus" theory and issue an open -- and sometimes violent -- challenge to the federal government.
The Posse Comitatus movement promotes the bizarre and flagrantly unconstitutional idea that county sheriffs are the only legitimate law enforcement authority. The movement derived in part from Anti-Semitic conspiracy theories and was described in 1998 by hate group expert Daniel Levitas.
Indeed, Posse Comitatus acolytes are actively injecting themselves into today's gun violence prevention debate by fueling anti-government angst and racial prejudice. Nationwide, news accounts have reported on threatening letters and/or statements issued by individual sheriffs who believe they have no duty to abide by federal laws they don't approve of. At the center of his campaign is a former sheriff with close ties to the National Rifle Association (NRA), Richard Mack.
http://www.huffingto..._b_2574169.html
Click to expand...

Must be a lot of lies.

Wonder why then do we have this movement:

A news report has been quietly making its way around the alternative media, under the radar screen, concerning a Delaware legal decision to strip county sheriffs of their arrest powers in the state.
The mainstream media has not reported the story, but the son of Vice President Joe Biden, who serves as Attorney General for the state of Delaware, has issued a mandate to county commissioners informing them that sheriffs in the state's three counties no longer have arrest powers.
When the information reached this reporter late yesterday evening, further investigation revealed that there is a nationwide effort to strip local sheriffs of most of their enumerated powers that are mandated in the state constitutions of the various states. Such a move would have the net effect of abolishing local sheriffs departments and strengthening the power of federal law enforcement agencies.
And this is not the first time such an effort has been launched.
https://www.examiner...eral-power-grab
Click to expand...

This is the latest from what I find:

No suprise that the NE is mostly white on the map. Maybe they should chance the name in that part of the country to "Libtardia"

Right after the south changes their party affiliation to Idiotica or Dumassia or my favorite ... Moranica. 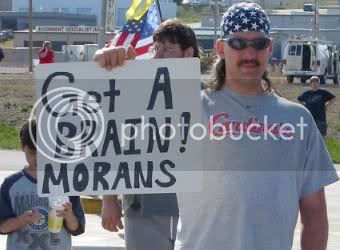 SparrowHawk said:
No suprise that the NE is mostly white on the map. Maybe they should chance the name in that part of the country to "Libtardia"
Click to expand...

Is that another cut and paste from an unnamed source you claim as your own
Reactions: 2 people
You must log in or register to reply here.

What's the matter with proving citizenship to vote?