Doug Parker has said that there are plans to have a TWA heritage colors aircraft.  (Good move!)

Which TWA look should it be?

It's likely that it will be an A319 since that the type for the other heritage ships.  But, wouldn't the Starstream colors look cool on an A330?

(For those who like the classic TWA look, I hope you did not "Sunday in New York" on Turner Classics yesterday, starring Jane Fonda, Rod Taylor and Cliff Robertson, and TWA!)

My vote would be for the final colors; I thought it looked great.

"Wings of pride" would be a solid 2nd choice as well... 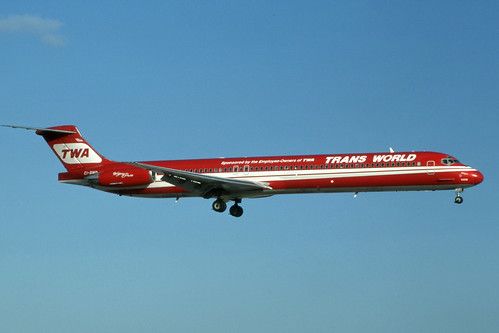 Thats cool, I have never seen that livery and I worked next to TWA at LGA.

It used to show up in PDX once in awhile. Was definitely a head turner...
OP

As long as we are thinking about TWA history:
https://www.youtube.com/watch?v=hqJ2yarT1Kg
S

It would be a great move.  Still hoping SWA will do the same with the AT colors...
Reactions: 1 person

My choice would be whatever colors represented their greatest heyday? I don't think the final designs in the last years would be appropriate as it could be a reminder of when there was the most turmoil.
Reactions: 1 person
L

My choice would have been the Wings Of Pride that flew for TW and I had hoped that same plane would be repainted in her original Wings Of Pride Livery.  However N948TW (she had a new tail number when AA purchsed her) went to the desert on July 2 with 72015 total hours on her airframe adn 37644 total cycles.

Put me down for "Gold Globe".

I saw that TWA w Wings of Pride in PHL once or twice and in BWI once as well as DCA few times during my younger days   Always loved that scheme along with the 1980s  and the final color scheme.
OP

WeAAsles said:
My choice would be whatever colors represented their greatest heyday? I don't think the final designs in the last years would be appropriate as it could be a reminder of when there was the most turmoil.
Click to expand...

I think the Starstream colors best represents that era.   It's also the best looking!

I loved the Twin Globes, but the Gold Globe would be great also.
F

I was wondering if Parker was going to do a TWA jet. I hope it gets done.

jimntx said:
I loved the Twin Globes, but the Gold Globe would be great also.
Click to expand...

Last I heard, Uncle Carl still owned rights to the twin globe logo! That's why we had to modify it when he pulled out.---- At one time, that logo was the second most recognized American logo in Europe. Second only to Coke a Cola. I guess he felt it might be worth something some day. One of the few things he kept after squeezing  everything else he felt he could out of the Airline!

I never worked for TWA but I feel if we are going  to do it you better do it right
for the legacy of one of USA's great airlines, so I say go Vito Corleone on Icahn's
ass and make him an offer he can't  refuse. The Twin Globes is the only choice.
Think of it this way Pepsi-Co buys Coke and kills the brand, ten years later
they want to sell Coke limited edition , are they going to use THE NEW COKE
logo from the early eighties. Hope they do it for all the ex TWA guys and retiree's.
Reactions: 1 person
You must log in or register to reply here.