Democrats.....the gift that keeps on giving

Funny...I'm not angry. You seem to be though.

KCFlyer said:
Funny...I'm not angry. You seem to be though.
Click to expand...

There a lot of angry people here.
I get sucked in to the negativity myself at times.

KCFlyer said:
Yes...America was screaming "we want the most historic number of meaningless bills signed in the first 100 days". Not. I believe what I heard about the most was this thing called "Obamacare"...where are they on that? I thought that the dear leader was going to repeal it on day one. Here we are 6 months later and still no repeal. The Senate hasn't even voted on it. Why not? This was one of the big reasons that the dear leader was elected and one of the big reasons most republicans won, since most republicans ran against it. Why haven't they done anything with it? Why are they willing to "let it implode on it's on" and hurt a lot of Americans before they do anything? Supposedly there is this terrific plan to replace it....where is it and how soon can we expect to see it enacted?
Click to expand...

You hang out in Hollywood a lot?

Thank the libtard SJW's for this. 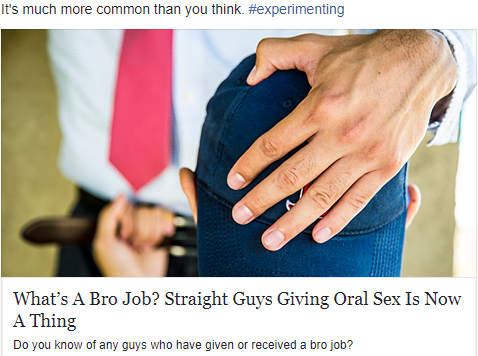 Just another day of the leftist media pushing the gay agenda.

Look who brought his "gay agenda" back.

Dog Wonder said:
Look who brought his "gay agenda" back.
Click to expand...

WTF just happened? Did fa la la it da di just ask proposition you to be his "bro"?

So what do you think? I think we need more Mom's like this!

He needs to take that picture to the water cooler at work tomorrow, won't work here.

Dog Wonder said:
Look who brought his "gay agenda" back.
Click to expand...

These Hillbilies can start their own thread but would rather hijack one.
No guts is what I am thinking....

xUT said:
These Hillbilies can start their own thread but would rather hijack one.
No guts is what I am thinking....
Click to expand...

First off I live in the plains, the flat lands, not the hills dumb dumb.

Second the Democrat liberals were the ones pushing this crap.

No, this is no hijacking of a thread. This is EXACTLY where this post belongs.
You must log in or register to reply here.

U
Most Americans have no idea what they are in for?

Can It All Be Coincidence?