Sidebar
You are using an out of date browser. It may not display this or other websites correctly.
You should upgrade or use an alternative browser.
I

Who is selling what?

They set up a premise out of whole cloth and then fabricate a story around it.

Anyone who buys into it has to be an complete idiot.
Reactions: 1 person

GOP And Democrat Tax Reform Plans Could Not Be More Differenthttp://news.investors.com/IBD-Edito...ven=rss&utm_source=dlvr.it&utm_medium=twitter 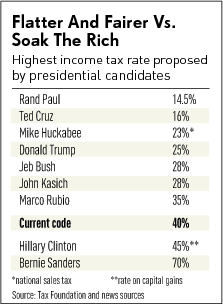 California has the highest tax rates on the rich of any state, yet it has nearly the largest gap between rich and poor. So what do higher tax rates get you? Perhaps the left gets some weird psychic income from knocking down the rich, even if it benefits no one.

The tax code is written by ghe wealthy anx by corporations to benifit the wealthy and the corporations. Capital vains is a rich persons form of income. That is partly why Buffet pays less taxes than his assistant as a percentage of income.

He who has the gold makes the rules.
OP
I

Well, Rubio is already paid for...

Yep, Mr Braman is expected to have paid close to $10 million to buy part of Rubio, Mr Singer is throwing his support to Rubio for an undisclosed sum.

Every election is selling the WH for a higher and higher amount.
N

They set up a premise out of whole cloth and then fabricate a story around it.

Anyone who buys into it has to be an complete idiot.
Click to expand...

ANYONE  who can 'knock'   Multi Pulitzer prize winning  Major newspapers like the Washington Post, the L A Times, Chicago Tribune or the most Powerful Newspaper in the World, the New York Times, ....THAT my friend is the definition of an COMPLETE IDIOT !

Oh, and one more thing.

PS,
Google the phrase.......' Confirmation Bias '.  Let me know what you find. (Unless GOOGLE is too much of an IDIOTIC search engine for you).

townpete said:
GOP And Democrat Tax Reform Plans Could Not Be More Different

California has the highest tax rates on the rich of any state, yet it has nearly the largest gap between rich and poor. So what do higher tax rates get you? Perhaps the left gets some weird psychic income from knocking down the rich, even if it benefits no one.
Click to expand...

Flatter and fairer....are you a Cruz voter?  He's got God on his side...he loves the constitution...and he wants to make taxes fair for everybody by cutting that top rate to 15%.  Of course, he also proposes a 23% national sales tax...keeps things fair that way.. After all, the guy who no longer has a half a million in income taxes to pay won't have a problem with paying a 23%  tax on the things he buys.

But what about the poor sucker in a trailer working two jobs and supporting the republicans?  He'll get a tax savings of about $1,000 in HIS income tax cut...but he'll end up paying about $5,000 MORE in his national sales tax.   Just for fun...take what you paid for groceries, clothing, entertainment, home improvement and take 23% of that and tell me how much the tax cut for the rich worked out for you.
Reactions: 1 person
OP
I

We don't wanna talk about that part...

True enough...but I don't think Pete realizes how tax cuts that are proposed by republicans will impact guys like him.  Here in Kansas, taxes on business owners were cut to zero.  And because of a wee little loophole, "pass thru" income from the business to the individual also had a zero tax rate.  I'm just a middle class guy in the suburbs of KC (Kansas side).  I got a tax cut too...it amounts to a total that is about one months worth of groceries.  Well...Laugher's theory isn't working....revenues aren't increasing...jobs aren't being created, and we are facing a budget shortfall.  So they stole from the state pension fund...they borrowed from the state highway fund and it wasn't helping.  SO.....they raised the sales tax.  They also raised tobacco taxes.  But a funny thing happened....the expected increase in tax revenues isn't what they expected.  It MIGHT have something to do with the fact that the largest metro area in the state has a street named "state line road" running thru it.    So it's more cutting from highways....borrowing from other places and closing their eyes and clicking the heels of their red slippers.   So if a guy like Cruz gets elected, then on top of the increased sales tax I pay to Kansas....I will have another 23% added as a national sales tax.   But...at least that income tax rate is low.
Reactions: 1 person
OP
I

Can just hardly wait to hear He and The Faithful explain how this 23% sales tax is going to "help" the economy. Imagine the impact on the typical working class or middle class family, or the retiring baby boomer generation's spending/buying habits when they realize that everything just got 23% more expensive.

Can you say recession, unemployment, bankruptcies personal and business at all-time highs, etc.

Kansas voted for that idiot. Be careful what you wish for.
Reactions: 1 person

How can he?  Per the birthers he's not "natural born" therefore he's not eligible.

Ms Tree said:
Kansas voted for that idiot. Be careful what you wish for.
Click to expand...

Actually, in the last election, he won but only got 48% of the vote...more people voted against him.  The problem is - while there were several Kansas republicans how had a "republican for Davis (the democrat)" sign in their yard, there was a third party candidate running.  And many Kansas republicans could not vote for a democrat if it were Jesus himself running, so they voted for the 3rd party candidate.  He won...and Kansas continues to reap the benefits of the Laugher theory.  When asked why things weren't working in Kansas, Laugher himself (who worked with Brownback) said "This takes time....it could take up to 10 years to see results".    Rather odd, because prior to the tax cuts, Kansans were promised that they would be "a shot of adrenaline" to the economy.
Reactions: 1 person
You must log in or register to reply here.

Bob Crandall does not want a damn tax cut.