Origin of the CCP Virus:

Interesting take on the virus by Bill Maher

Seatacus said:
Interesting take on the virus by Bill Maher 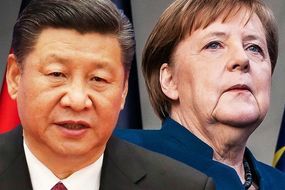 Seatacus said:
Interesting take on the virus by Bill Maher

He's right up to a point. Given our dear leaders rabid following, anyone with black hair and olive skin who speaks Spanish is "Mexican". And "Mexico isn't sending their best....they are rapists" gets people to equate Mexican with Rapists. ANd before anyone tells me that's not right, I should remind you that ex-Pete posted several articles of an attack by a "Mexican" person.

If Trump wanted to attribute it to China, he would have been better off calling it the "Wuhan virus". But he didn't. He called it the "Chinese Virus" or "China virus". And given many of his followers penchant of personalizing anything the dear leader does, will turn around and suddenly hate anyone that had dark hair and somewhat slanted eyes.

It's an example of where Trump could have said something and had more support had he not played to the base with his constant campaigning via rallys that he has done for the past 3.5 years.

Thank you Dell!....... Looks like they Deleted my version!
OP

So tell me, Insp69, is there a medical protocol for your ARRESTED DEVELOPMENT ?
OP

NewHampshire Black Bears said:
So tell me, Insp69, is there a medical protocol for your ARRESTED DEVELOPMENT ?
Click to expand...

There may be more truth to this than anyone would like to admit!

looks photoshopped to me.
OP

Pelosi Blocking Wuhan Investigation in Favor of Pinning Pandemic on Trump https://www.westernjournal.com/gop-...lS5yrk8dC-Q71Myz4aPbHSpMND7esNr2FQv0j9mzEaMh8
You must log in or register to reply here.