I bet you framed your "I voted" sticker.

Don’t get one when you vote by mail.
OP

Dog Wonder said:
Don’t get one when you vote by mail.
Click to expand...

Did the postal workers take you to lunch?

KCFlyer said:
You do know that the other guy wanted to do the same thing 4 years earlier. Indeed...the other guy..the "art of the deal" guy negotiated a withdrawal timeline with the Taliban in May 2020. This is one of those times I wish he would have won because I'd love to see who he would blame. We don't have mean tweets, but we also don't have a blamer.
Click to expand...

How's that working out?

Here are two comments from Gen. McKenzie in Sep and Oct 2020, on the withdrawal.

“What we need to see is that they’re not going to allow al-Qaida to base there,” said Gen. Frank McKenzie, head of U.S. Central Command, in a September interview with NBC News. “And that has just not yet been demonstrated to my satisfaction.”
Click to expand...

“We’re not going to leave anything behind that somebody could use against us in another time and another place. So that’s actually a huge logistics effort and it is continuing now,” McKenzie said last month.
Click to expand...

Biden himself in the foot with his own weapons.

What do I expect?

Well now I expect economic migrants and terrorist to make their way to Europe.

On their way to Tulsa 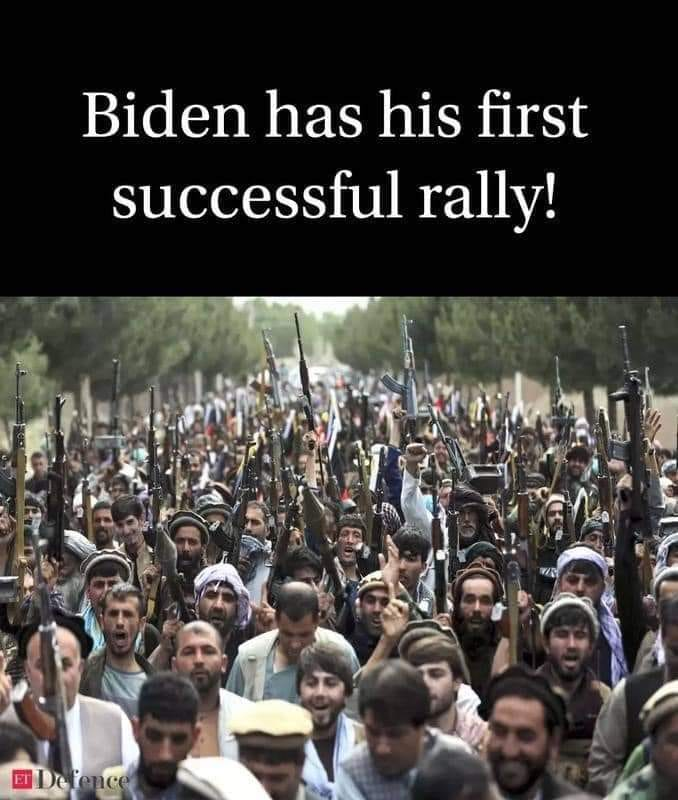 He heard they didn’t have any good equipment so he gave them ours.

KCFlyer said:
I accept that. But if those are your rules, then you have the blood of thousands more who died in a war that literally did not need to be fought. I ddn't vote for Bush, but you did.
Click to expand...

Actually, I voted for Gore in the 2000 election, so no, there's no blood on my hands for the second invasion of Iraq or Afghanistan, but hey, do keep on deflecting.

I read that our troops have just left Afghanistan. Heaven help any American citizens left behind.

Get your news by carrier pigeon?
OP

Dog Wonder said:
Get your news by carrier pigeon?
Click to expand...

And you get yours when you get swatted with a rolled up newspaper. Bad doggie.

Miso Phat..... said:
I read that our troops have just left Afghanistan. Heaven help any American citizens left behind.
Click to expand...

You got that right.

Dog Wonder said:
Get your news by carrier pigeon?
Click to expand...

You saying no Americans have been left behind?

CBS and CNN, the people who elected this idiot, have been all over his actions and policies. Stooge won't even answer questions...
So what carrier pigeon is your bird of choice?
You must log in or register to reply here.

WHAT IS REALLY GOING ON IN NASHVILLE...

Palin is not qualified to be POTUS